Another short week of Premier League action is upon us. Will Jose Mourinho’s men bounce back against Southampton? Will Carlo Ancelotti lead Everton to their third consecutive victory?

Week 20 of the Premier League was entertaining and sparked more debates regarding the effectiveness of VAR in English football. Of all the games over the weekend, Chelsea’s late comeback against Arsenal stole the headlines. Tottenham’s 2-2 draw on the road against Norwich City was the only true shocker of the weekend.

Week 21 will also consist of plenty of action and possibly more drama across England. Mikel Arteta will hope he can claim his first victory tomorrow when Arsenal host Manchester United in London, and Carlo Ancelotti’s men plan to extend their winning streak to three games by frustrating Pep Guardiola‘s side at the Etihad Stadium.

David Moyes will be making his debut on the sideline for West Ham after the club sacked Manuel Pellegrini following their 2-1 defeat against Leicester City. With all that being said, let’s turn our attention to each game that will be played on Wednesday and Thursday. 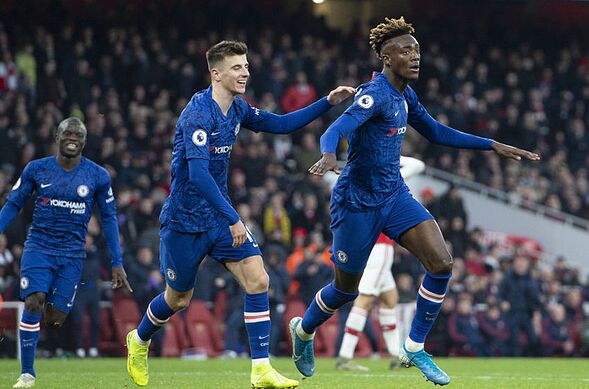 LONDON, ENGLAND – DECEMBER 29: Tammy Abraham of Chelsea celebrates scoring the winning goal with Mason Mount during to the Premier League match between Arsenal FC and Chelsea FC at Emirates Stadium on December 29, 2019 in London, United Kingdom. (Photo by Visionhaus)

Chelsea lost three of their six games in December to inferior opponents, but managed to win on the road against both Tottenham and Arsenal. Tammy Abraham scored the winner against Arsenal in the 87th minute and that should serve as a major boost of confidence for the young striker who has 12 goals this season, but only scored once in his last five games.

Brighton are tricky opponents, especially at home, and they are exceeding expectations at the moment with 23 points from 20 games and have a goal differential of -4, which shows they keep games close. The Seagulls claimed eight points in December, three of them coming against Arsenal in London, but defeating Chelsea will not be as easy. I expect the Blues to correct their defensive errors from December and start January off with a win.

Next: Spurs at Saints; Newcastle Utd host Leicester City
Next1 of 6Prev post
Use your ← → (arrows) to browse
Event Tickets
Powered by StubHub