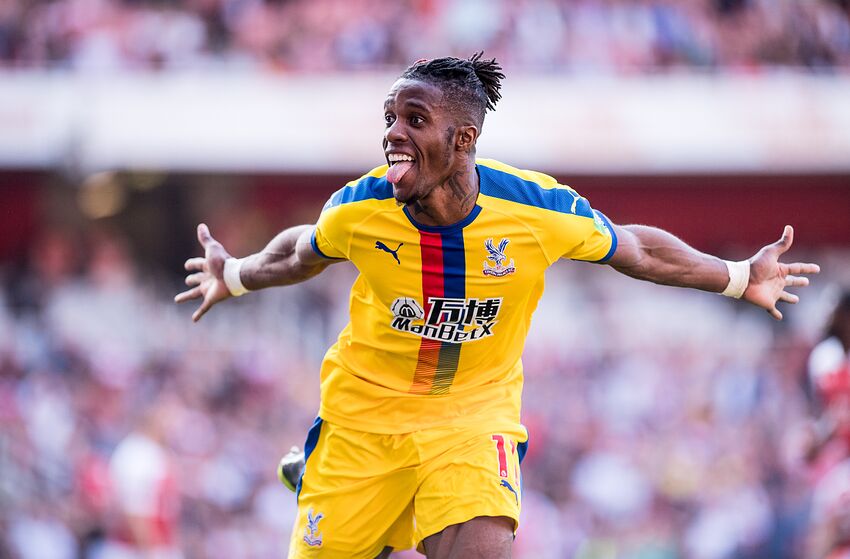 PSG need an infusion of talent from the Premier League

As the saga involving Paris Saint-Germain and Neymar Jr. continues to drag mercifully forward, multiple solutions seem possible. Going back to Barcelona is his own dream, but financial hurdles so far barricade the way. Real Madrid look to desperately need an additional spark thus far and without signing Paul Pogba, Neymar Jr. could be that necessary spark; they’ve got the money for certain. While the footballing world tends to gaze transfixed at Neymar leaving, fewer discussions center around who replaces him. Wilfried Zaha appears to be that replacement, and its hard to think of a better one for Kylian Mbappé.

Neymar’s replacement in Paris should be someone whose skill is electric, whose pace is frenetic and who can pass and score, playing wide alongside Kylian Mbappé and Edinson Cavani. Crystal Palace’s Wilfried Zaha fits all of those descriptions remarkably while lacking all of the drama usually associated with Neymar Jr’s time with a club, particularly his stay in Paris. Better still, Zaha’s ability to play in a forward position behind Cavani makes his utility to Thomas Tuchel even more pronounced.

It has seemed as though with Kylian Mbappé’s ascension to stardom and domination on the football pitch, that Neymar’s star has shrunk relatively speaking. While his persona remains gigantic and imposing, injuries and poor performances have stained his spell in the city of lights. Wilfried Zaha’s ego has remained a lesser force than his on field performances since he returned to Palace from his disappointing spell with Manchester United in 2013-14.

That humble nature will serve the Ivorian even better with a masterful tactician in Thomas Tuchel, a legendary striker in Edinson Cavani alongside the transcendent, selfless and relentless talent of Mbappé. The gears should turn with less tension should Zaha replace Neymar in PSG’s attacking third; can both deals get done as the international summer transfer window nears closure?

Neymar Jr. wants out of France, the incentives here are known and understood. Wilfried Zaha’s plight is similar, if perhaps not as well-known outside of the footballing community. With that said, I do believe there to be massive incentive on the parts of PSG, Real Madrid and Barcelona to get the first leg of the scenario “across the finish line”, so to speak.

PSG have grown weary of the mental baggage associated with rostering the Brazilian superstar, and Neymar for his part never fell in love with Paris as he did with Barcelona. While recovering the players extreme cost has so far prohibited a move back to Spain, creative methods for stretching out transfer payments continue to give previously unthinkable moves life, and even consummation. If Barcelona finally pony up enough cash over time, alongside a player or players like Ousmane Dembele, Nelson Semedo, Ivan Rakitic or even Malcom, Paris would be foolish to pass such an opportunity up.

Setting PSG up with youth to pair alongside Mbappé, like Dembele and/or Malcom is an even more mouth-watering prospect as it relates to subsequently using Neymar’s transfer fee for Wilfried Zaha. Playing Zaha right behind a front three of Dembele, Cavani and  Mbappé would be life threatening for any defense in Europe. That Zaha can then spell any of those front three should the need arise as well would cause matchup nightmares against the Parisians. With such youthful exuberance apart from Cavani, PSG would look to be a powerhouse in the Champions League for years to come.

The recent Champions League powerhouse Real Madrid could perhaps use Neymar even worse than Barcelona does. The outfit continues to struggle domestically and despite Zinedine Zidane’s Champions League acumen, little realistic hope can be mustered that their form would change so greatly between competitions, as it once was so capable of.

While Real Madrid have more capital available to lure Paris and Neymar with, they’ve got significantly less young personnel to dangle. The opening bid featuring Gareth Bale, Keylor Navas, James Rodriguez and €100 million was soundly rejected for just this reason. Madrid is an old team looking to get younger, as Zidane’s recent transfer dealings further demonstrate; is PSG as enamored with Luka Jokić as Ousmane Dembele? Likely not.

Should PSG be overwhelmed by some staggering monetary/personnel offer made by Madrid, they would have easily enough money and then some in order to purchase and pay Wilfried Zaha. They could subsequently invest further during the Winter transfer window, with young pieces like Hakim Ziyech, Donny van de Beek and Ismailia Sarr still available. Losing out on the on the quality of players that Barcelona offers would be difficult and less than optimal for PSG of course, but a greater urgency looms.

Moving on from Neymar should be the ultimate goal currently for the sake of the team. His presence has spoiled, despite his practical footballing genius. He does not accentuate the team or their primary star Mbappé any further, instead perhaps even detracting from him as strange as that may seem. His need to have both the ball and the spotlight damages the trajectory of an overwhelming talent like Mbappé. Having said that, Wilfried Zaha’s integration would be a welcome addition for both Mbappé, and PSG as a whole.